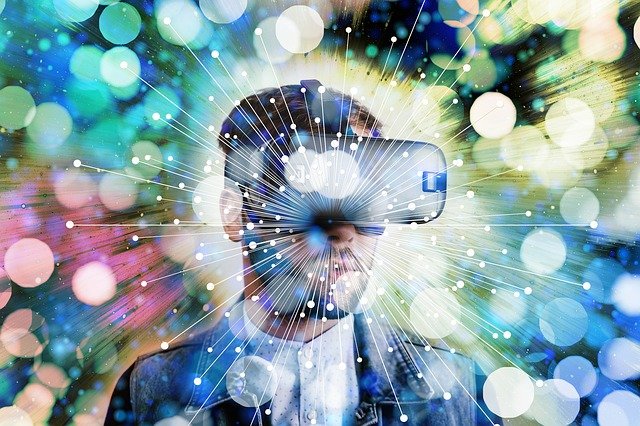 Virtual Reality (VR) is a computer-generated environment with objects that appears to be real to make the user feel that they are immersed in their surroundings. So the environment is per received by the device known as a Virtual Reality headset or helmet. It is a technology that simulates the vision to the end of the 3D ether environment in which the user appears to be immersed while browsing through it or experiencing it. The 3D environment is controlled by all the 3D users who experience it. Virtual reality technology is used to create an immersive experience to help educate and to even entertain consumers. It is applied in a variety of industries such as medicine, architecture, the military, etc.

The three types of virtual reality used are :

It gives users the most realistic experience possible, complete with sound and sight. The virtual reality headsets provide high-resolution content with a wide field of view. A treadmill or some other suspension apparatus, headphones, gloves, and head-mounted displays complete the system. Games and other environments in VR arcades commonly use this type of virtual reality.

We often forget that simulations constitute VR because they are so common in our everyday life. It is technically true that video games are non-immersive virtual reality experiences and users interact with the virtual world from a physical environment. It has become more advanced in recent years with the video games like Wii sports, where the system detects your motion and translates it to the screen.

The process starts with the simulation of putting on the headset. Users can usually start up with the application of a PC or console. In order to immerse themselves in the VR experience, the users plug in their VR headsets and switch their view to the headset. It is then necessary to adjust the headset so that it fills the peripheral vision of the user, so that they can use the motion controls to control the scene as it pans across the screen. The user who keeps the headset on the scene will continue to move and interact with them so they can move their head or use the controllers to look around and interact.

Virtual Reality technology continues to improve the immersion ad well. New headsets such as the Oculus Rift, and Samsung Gear VR system are available for the users in almost anyone’s home. Samsung GearVR and Oculus Rift are virtual reality systems that work with the latest Samsung Galaxy smartphones to make any smartphone screen a virtual reality display. As more competitors continue to develop products it will be interesting to see the market evolves and the types of products that are available to users shortly.

One of the main attractions of a virtual reality experience is that you can interact with the content as if it is real. So the technology was not good enough to build a realistic experience but all they have changed. The elements of interaction depend on the range, speed, and mapping. The power to move from one place to another inside a virtual world, the ability to change the environment, and the best interactivity elements.

In the virtual environment, they should be able to immerse themselves completely. The VR artist should focus on the atmosphere, engagement factor and the entertainment factor to experience is immersive and the users should feel that they are part of the game or environment.

With virtual reality’s sensors and responsive devices for sight, hearing, touch, and kinaesthesia, viewers can experience different perceptions such as vision, hearing, touch, and kinaesthesia through human-computer interaction with the virtual environment. The research and the development of VR are to expand human cognition and perception capabilities and to establish a harmonious human-machine environment.